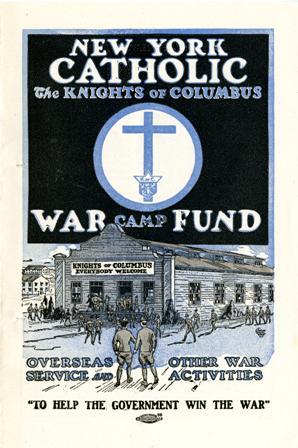 In March of 1918, Catholics of New York launched their most ambitious fundraising campaign of the war: the New York Catholic War Fund Drive.  The main purpose of the drive was to fundraise for the war work of the Knights of Columbus in their camps across the country and overseas.  The week-long campaign ran from March 17 – 25, 1918, with an ambitious goal of $2,500,000.

The fundraising campaign was painstakingly organized, down to the last detail.  There were numerous committees to organize the drive, including Finance, Contributions, Lists and Quotas, Publicity, Speakers and Meetings, and an Executive Committee of Clergy.  Each committee had an honorary clerical chairman and a lay chairman.  The Archdiocese was divided into 13 zones (9 within the city and 4 outside), with captains and teams within the zone, and every parish had a fundraising quota.  The Fund was a success in part because it had almost no expense—most of the work was done by a team of 50,000 volunteers. 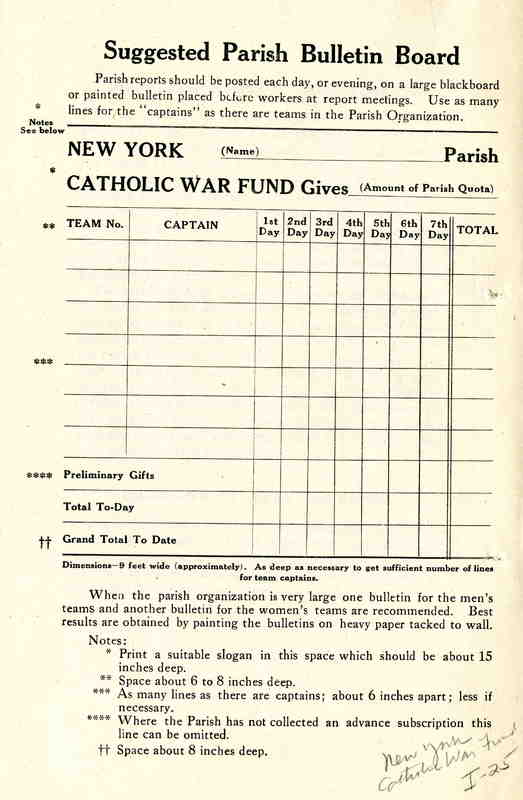 This form was one of the many distributed to the parishes to help them organize the campaign.

The work of the drive was begun with a mass meeting of over 750 priests on February 21.  Although some parishes were worried their assigned quotas were too high, Cardinal Farley’s response was “This is not an ordinary appeal.  It is an extraordinary appeal.”  The priests then returned to their parishes, where each of the 297 parishes in the Archdiocese held an organizing meeting.

The drive was formally opened on Sunday night, March 17, with a mass meeting at the New York Hippodrome for the 5,000 team captains from all the parishes.  The Secretary of the Navy and Cardinal Farley addressed the meeting.  Prominent members of other religions also attended the meeting, including Rabbi Joseph Silverman of Temple Emanu-El amd Rev. William Manning, rector of Old Trinity Church.  Postcards, window cards, pamphlets, and other promotional materials were distributed to all of the team captains and parishes.

The next day, a “monster” parade was held.  Parishes held dances and other fundraising events: St. Mary Star of the Sea on City Island in the Bronx held a rally with the Naval Band from the Pelham Bay Training Station.  The pastor of Our Lady of Victory Church in the Bronx, Rev. Bartholomew Galligan, opened the drive in his parish by donating his life savings of $1,000.  Elsewhere in the Bronx a thermometer was erected at the Continental Bank at 149th Street to show the progress of the drive.  St. Elizabeth’s parish in Washington Heights was able to obtain an autographed photo of President Wilson, which they auctioned to the highest bidder with the proceeds going to the fund.  The Fife and Drum Corps of the St. Catherine of Siena Boy Scouts rode on top of a 5th Avenue bus one afternoon, performing and collecting money for the fund. 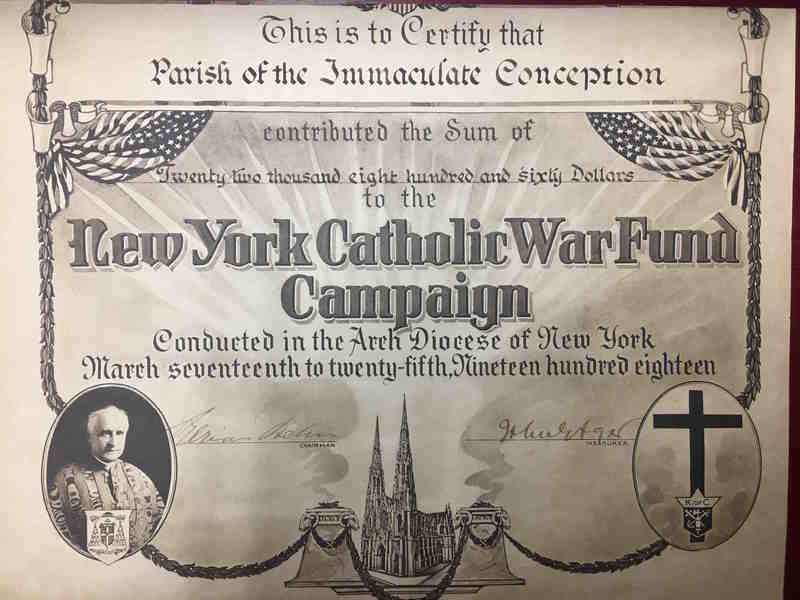 City-wide events were also held. A wrestling match held at Madison Square Garden brought in over $1,600, and the grocery store chain of Daniel Reeves donated 10% of its gross receipts on Thursday, March 21.

Although the Church was the drive behind the campaign, the appeal went beyond Catholics to all people in the city.  Reaching the goal, they were told, would be, “An expression of loyalty and generosity worthy of the citizens of the Metropolis.”  New Yorkers of all religions responded to the call.  Jewish New Yorkers living within the parish of St. Frances de Sales put on a fundraiser for the drive at the New Star Casino on Park Avenue, which included a number of renowned opera stars and the Victor Herbert orchestra.  Support for the drive also came from former President Theodore Roosevelt, who wrote to Clarence Mackay, Chairman of the Finance Committee: “I most heartily wish you success in your public spirited and patriotic campaign to help our country win this war for righteousness by furthering the movement of the Catholic War Fund.  Every good American must feel his heart stirred by Cardinal Farley’s really noble appeal….The men who go to the front are fighting for all of us and we should back them in every way.” 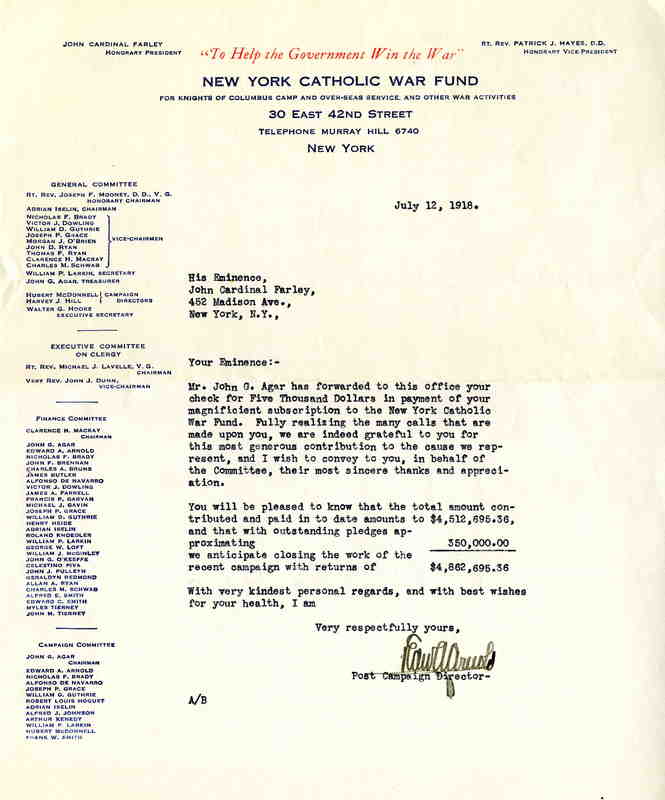 At midnight on the last day of the drive, St. Ignatius Loyola Church on Park Avenue announced that they had far exceeded their $50,000 with a total of $144,000 raised.  St. Vincent Ferrer, Blessed Sacrament, Holy Trinity, and St. Patrick’s Cathedral all brought in more than $70,000, doubling their quotas.  When Cardinal Farley was told at the close of the drive that it was believed that the total would exceed three million dollars, his response was “God be praised for it all.”  In total, the drive brought in closer to five million dollars.