During the war years, St. Agnes’ Orphanage in Sparkill, New York, run by the Dominican Sisters, held military training drills for the boys in the home run by several cadets from West Point.  The drills helped the boys to acquire “a manly, intelligent bearing.” The group often participated in local parades and other events to honor the men serving overseas.  The boys also had a Fife, Drum, and Bugle Corps.  This group also performed for many civic and military events around Rockland and Orange counties.  The sisters worked to instill a strong patriotic feeling in their charges, particularly those whose parents were of foreign birth, through frequent patriotic programs and other events.  By the end of 1917, 25 young men from St. Agnes’ were enlisted for service in the war.  Sacred Heart Church in the Highbridge section of the Bronx also offered military training and drill classes in the parish hall for all men within the draft ages.  The class met twice per week during 1918, and had over 55 men attend each session.  There were rifles and bayonets provided by a firearms manufacturer. 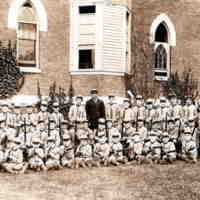 St. Agnes Cadets, Courtesy of the Dominican Sisters of Sparkill 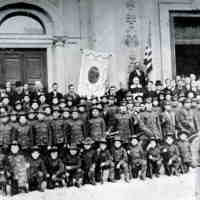