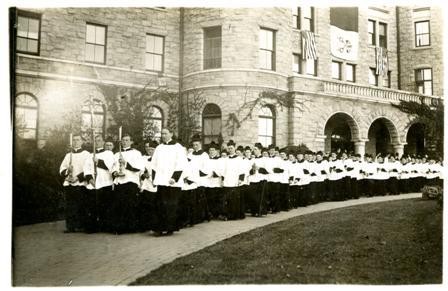 Seminary Life During the War

St. Joseph’s Seminary did not go unscathed during the war. Faculty members and students answered the call to join the war effort in various capacities.  Those who were priests entered the war as chaplains. Two such teachers were Fr. John J. Mitty, chaplain of the 49th Infantry, and Fr. Robert Mulcahy, chaplain of the 101st Infantry. Their positions on the faculty were held for them for when they returned. Some students left the Seminary to join the Army or Navy, whereas other students stayed behind and contributed to the local war effort by aiding the Red Cross, donating to the various war drives, and working on farms and other jobs that helped the cause. Classes continued as planned, with the occasional lecture on war related topics.

In the spring of 1917, the members of the class of 1918 were informed that they would be ordained early on September 8, 1918.  Early ordination was ordered to make up for the scarcity of priests in the Archdiocese, after so many volunteered as chaplains. These students returned to the Seminary early in the summer to complete a six week intensive course so they could be prepared for a September ordination. Sixteen new priests were ordained early by Cardinal Farley at St. Patrick’s Cathedral on September 8, 1917. At the start of the 1918-1919 scholastic year, all third year men were ordained, leaving the Seminary with no major orders men. Their usual tasks were carried out by the faculty members 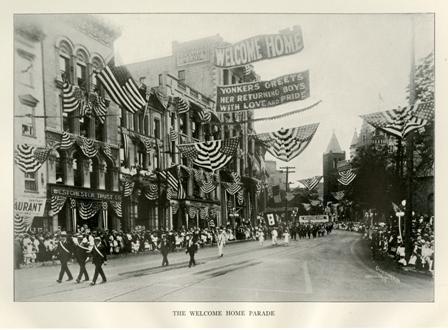 The End of War

Rumors circulated, at the beginning of November, that the end of the war was near. The students of St. Joseph’s Seminary, as well as the rest of the world, anxiously waited for the news of the armistice. When it was finally announced on November 11, 1918, the bells of the Seminary tolled along with all those in the surrounding area. The seminarians were granted a holiday and spent it celebrating. Some students participated in the celebrations held throughout Yonkers. Others paraded around the grounds of the Seminary where they were joined by students from Public School 17 who were marching through Dunwoodie to celebrate the news. They sang the “Star Spangled Banner” together and listened to the encouraging words of the rector, Msgr. John Chidwick.

The celebrations held at St. Joseph’s were just one example of the multitude of festivities that occurred across the nation after the news of the signing of the armistice was made official. During the month of November various displays of patriotism occurred throughout the country. Parades were held in cities, allowing all those who had worked so hard on the home front to finally celebrate. It was not uncommon, during this time, to see streets lined with American flags. More celebrations would continue as the men slowly began to arrive home. 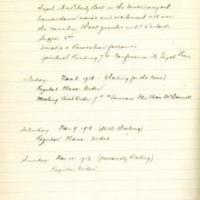 The pages shown above are from the 1918-1919 Seminary Regulator Diary from the time of the signing of the Armistice. 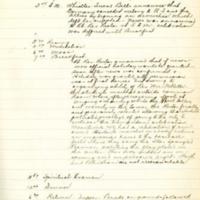 The diary was kept by one student whose job was to document the day to day life at the Seminary.