Priests on the Battlefield 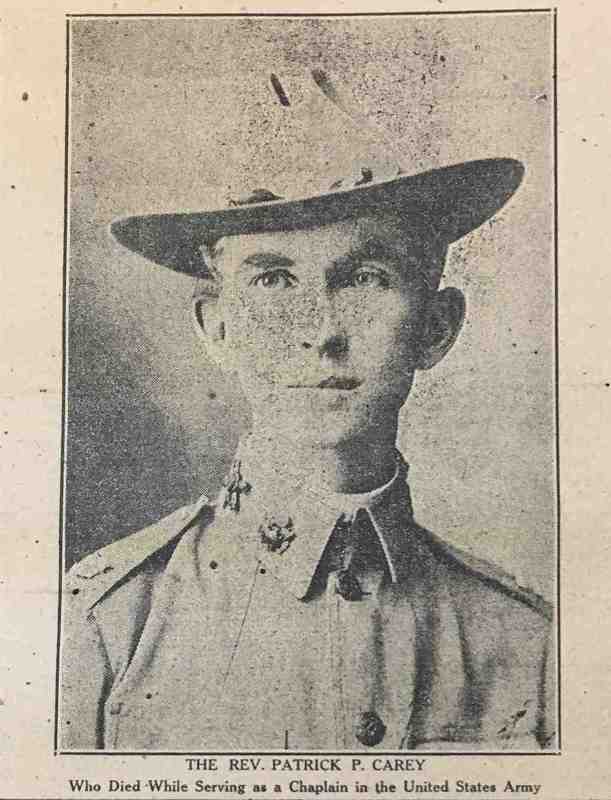 Patrick Carey was ordained from St. Joseph’s Seminary, Troy, in 1895.  He initially served as parochial vicar at the Church of the Annunciation in Manhattan, but entered the army as a chaplain in 1902.  He served for ten years, part of the time overseas in the Philippines, but retired in 1912 because of ill health.  He went on to serve at the Church of the Most Precious Blood in Walden and St. Gregory’s in Harrison.

In March of 1918, the army recalled him into service, and he was sent to serve as chaplain in the Army and Navy Hospital in Hot Springs, Arkansas.  Shortly after his arrival, he developed pneumonia and died.  His body was sent back to New York, and lay in state at St. Elizabeth’s in Washington Heights.  There was then a High Mass of Requiem at St. Patrick’s Cathedral.  His casket was draped with an American flag, and he had a full military escort provided by the Army.  His body was then sent to Waterville, NY, his hometown, where he was buried beside his parents.  Rev. Carey was the only New York chaplain to die during the course of the war. 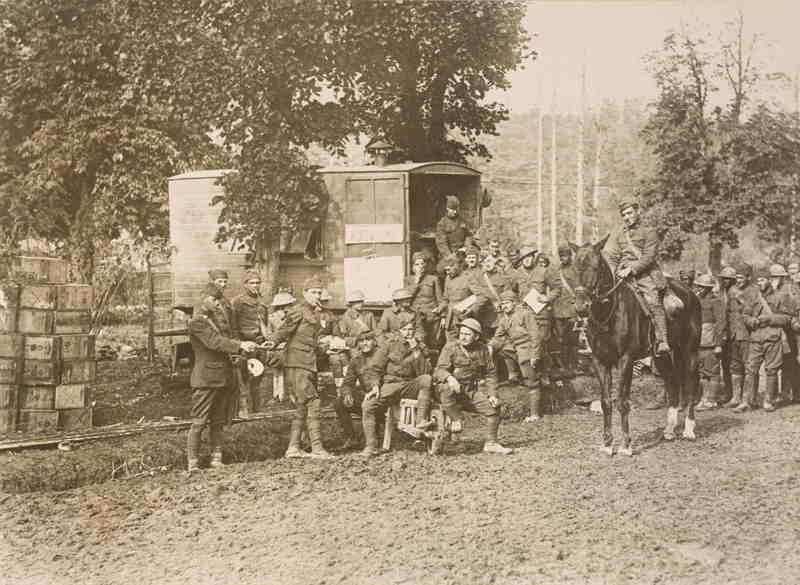 Some of the rescued men from the Lost Battalion, having a meal at a Knights of Columbus kitchen in an American camp in France.  Courtesy the National Archives.

In October 1918, about 554 men from the 77th Division were cut off by the Germans from the rest of the American troops after an attack in the Argonne Forrest.  The men were isolated for 6 days, during which time 197 men were killed, and 150 went missing or were taken prisoner.  The remaining 194 men held their ground, which allowed American troops to break through the German lines and rescue them.  Most of the men from the 77th Division were from New York.  The group was known as the “Liberty” division due to the Statue of Liberty emblem on their uniform.

Rev. James Halligan, senior chaplain for the 308th Infantry of the 77th Division, was part of this group.  On November 3, 1918, Chaplain Halligan received a tribute to his “valorous conduct” during the days of the Lost Battalion.  He was specifically cited for his “untiring devotion to duty and disregard of his own safety when he searched for two days through the forest until he found the body of Lieutenant Colonel Frederick E. Smith, 308th Infantry, and arranged for an appropriate funeral in the cemetery of the ruined church at La Harazee. By his encouraging talks with the men, his cheerful and sympathetic letters to anxious relatives at home, and his general cheerfulness under all the hardships incident to field service, this officer contributed immeasurably to the morale of his regiment.” 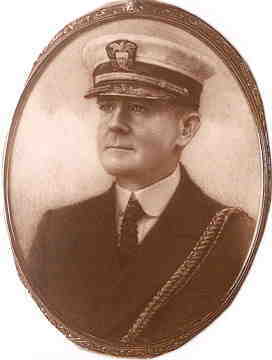 Rev. Matthew Gleeson, ordained from St. Joseph’s Seminary, Troy, in 1896, had a distinguished career in the Navy.  He was commissioned a chaplain on October 3, 1903, and was ultimately appointed the first Fleet Chaplain in the United States Navy.  Gleeson was on board the U.S.S. Missouri in 1904 when a turret exploded, and was cited by then-President Theodore Roosevelt for valor.  On May 21, 1904, President Roosevelt wrote: “Father Gleeson’s behavior throughout this trying ordeal was in every way such as to give legitimate reason for satisfaction and pride to all interested in the Navy, and to all, therefore, who believe that the Chaplains of the Navy should show courage, common sense, and efficiency no less than devotion to the spiritual and material well being of those aboard the ships. It is a pleasure to record the gratification I feel in taking notice of what Father Gleeson has done.”

The rapid growth in the number of Navy chaplains as a result of the war led to the need for an experienced chaplain to oversee and coordinate the activities of all the chaplains serving in the Navy.  On June 8, 1918, the creation of an office of the Fleet Chaplain was authorized by the Secretary of the Navy.  Rev. Matthew Gleeson was appointed the first Chaplain of the entire Fleet on June 16, 1918.