“Both of us, Bishop and priest, are an integral and necessary part  of wartime jurisdiction—it would hardly do to call it a diocese—with the flock ever on the brink of eternity scattered over land and sea, amid the perils of the battle front, perils of the fortressed clouds, and perils of the garrisoned deep.  Hardly ever before in the history of the Church, have shepherds been called to follow and care for the fold of Christ under more dangerous and heroic circumstances.” – Bishop Patrick Hayes, Circular Letter to the Catholic Chaplains of the Army and Navy, April 1918 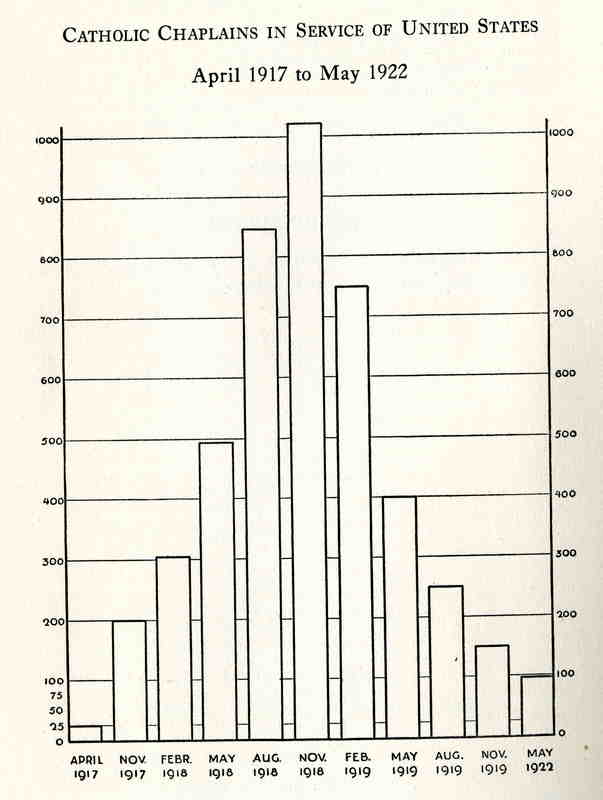 When the United States entered the First World War on April 6, 1917, there were a total of 25 Catholic chaplains between the Army and the National Guard.  The Federal Government quickly issued a call for more chaplains to serve the rapidly increasing number of troops, most of who had never been away from home before.  Clergy of all denominations were excluded from the draft, but volunteered as chaplains in large numbers.

Before the war, the quota of Catholic chaplains was set at 24 percent; however, a survey of religious statistics by the government resulted in a quota increase during the war years to 37.8 percent.  By Armistice Day, there were 1,023 Catholic chaplains in active service, and 500 applicants scheduled to be commissioned on January 1, 1919.  Based on the number of priests in the Archdiocese of New York, its quota for the war would have been 49.  87 priests from the Archdiocese ultimately served as chaplains.

General Pershing, commander of the American Expeditionary Force, supported this increase in chaplains, writing “Counting myself responsible for the welfare of our men in every respect, it is my desire to surround them with the best influence possible.  In the fulfillment of this solemn trust it seems wise to request the aid of the churches at home.” 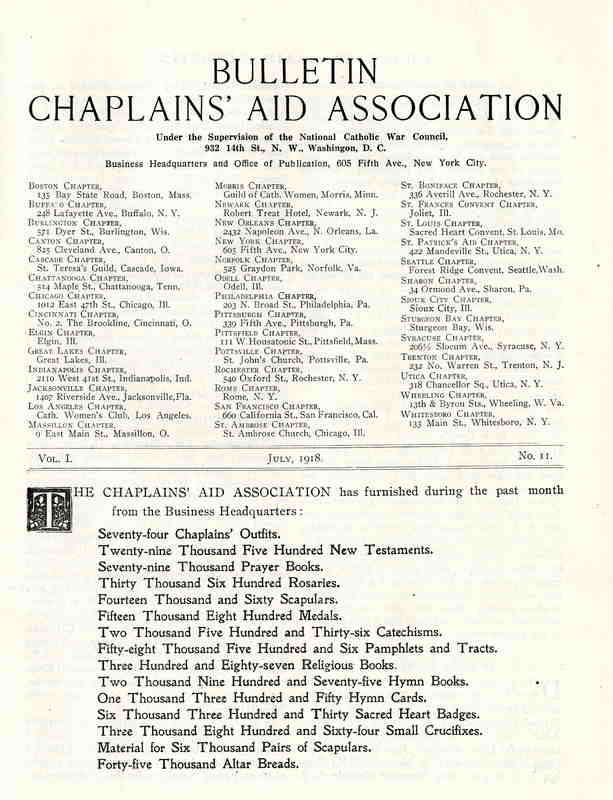 There were a number of groups organized to ensure that chaplains could properly serve their flock.  The Chaplain’s Aid Association provided chaplains with devotional items (rosaries, medals, religious pictures, books, and magazines) to distribute to soldiers.  Many chaplains were also sent a kit that included altar stone, linens, chalice, vestments, cruets, altar cards, and candlesticks.  Members of the Association were asked to donate money as well as commit to each day reciting one Hail Mary and one Our Father for the welfare of soldiers and sailors.

The Chaplain’s Aid Association published a Chaplain’s Catechism in 1917.  This was a brief, elementary study book to provide to soldiers currently serving in the army who wanted to be baptized into the Catholic church.  The book cost 5 cents, and hundreds were distributed to chaplains.  The Association also provided every soldier, Catholic and non-Catholic, in New York’s 69th Regiment with a prayer book, rosary, and scapular medal.