The Catholic Church and the War 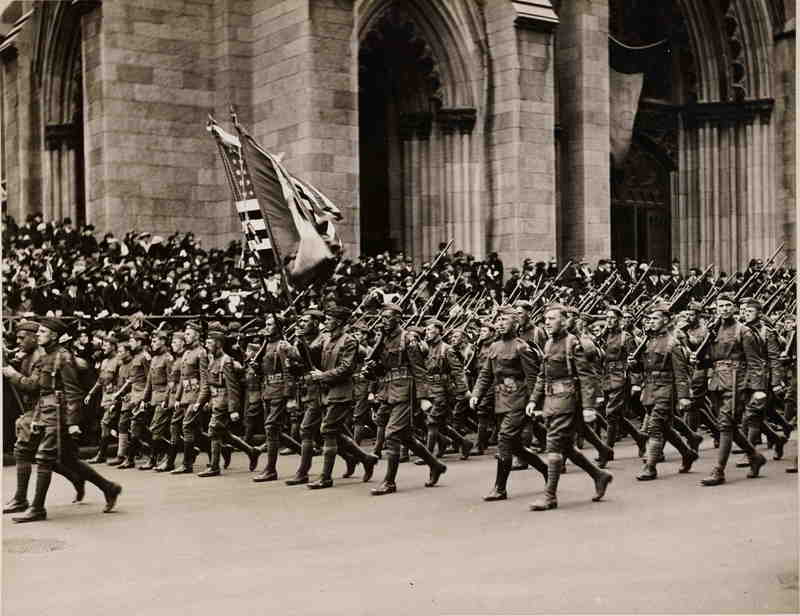 Members of the 77th Division marching past St. Patrick’s Cathedral on their way to training camp.  Courtesy the National Archives.

According to the United States Census Bureau, in 1916 there were almost 16 million Catholics in the United States, with over half of Catholics living in urban centers throughout the country.  The major center of the Catholic population was the stretch of the East Coast from Boston to southern New Jersey.  The Archdiocese of New York was one of the largest Catholic dioceses in the country.  With over 1,200,000 Catholics living in Manhattan, Staten Island, the Bronx, and the upper counties of Westchester, Putnam, Dutchess, Rockland, Orange, Ulster, and Sullivan, the 387 churches and 1,110 priests of the Archdiocese were kept busy.  The parochial school system served over 88,000 students in 183 grammar schools, and in 1917 alone there were 45,372 new Catholics baptized.

Prior to America’s entrance into the war, New York’s Cardinal John Farley believed that his role as the head of the Catholic Church was to promote peace throughout the world and encourage his flock to support the official position of the American government: neutrality.  He was following the lead of Baltimore’s Cardinal James Gibbons, who wrote that his fellow priests should “say to the world: ‘Peace, be still.’  They should never add fuel to the flame.”  Farley strongly encouraged his priests and parishioners against any action which could be read as condemnation of the American government, and particularly President Wilson.

However, immediately after America’s entry into the war, which occurred on Good Friday, Cardinal Farley’s stance changed.  On April 12, 1917, he issued a circular letter to all parishes in the Archdiocese.  The letter read, in part:

“Our Country is at war….In this solemn hour then when [America’s] fortunes are at stake, when all that she has stood for, and stands for, is jeopardized by the hazard of impending warfare, will not her sons hearken to her call, will they not buckle on the armor of the conflict, and rushing to her rescue lift high her glorious banner of liberty and justice?  Our President having spoken, and our national Representatives having spoken, the response to the voice of the authority they embody, will be, that we will rally around our flag with the completest fullness of devotion, and with loyalest hearts, and sturdiest arms place all that we have, and all that we are, at our Country’s service….We will render to her what our Catholic faith, and our Catholic teaching sanctions, nay sanctifies.  No demand on our American manhood or American citizenship will go unanswered, or will not find us true Americans, true children of our Church, that was never found wanting in any crisis of American history….our path of duty lies clear before us.”

Throughout the Archdiocese, Catholics responded to Cardinal Farley’s call.  Young men enlisted in the army in huge numbers, with some parishes in the diocese sending hundreds of men overseas, many of whom would never return.  Women in parishes started Red Cross branches, or other knitting and sewing groups, to send much needed items to troops throughout the country.  Catholic lay groups, like the Knights of Columbus, spearheaded much of the archdiocese’s work.  There were several major fundraising efforts in the archdiocese during the war years, which ultimately raised millions of dollars for various causes.

From schools to churches, hospitals to orphanages, no group in the archdiocese remained untouched by the effects of the war.  This exhibit will highlight the different ways the Archdiocese of New York contributed to the war effort, both overseas and on the home front.