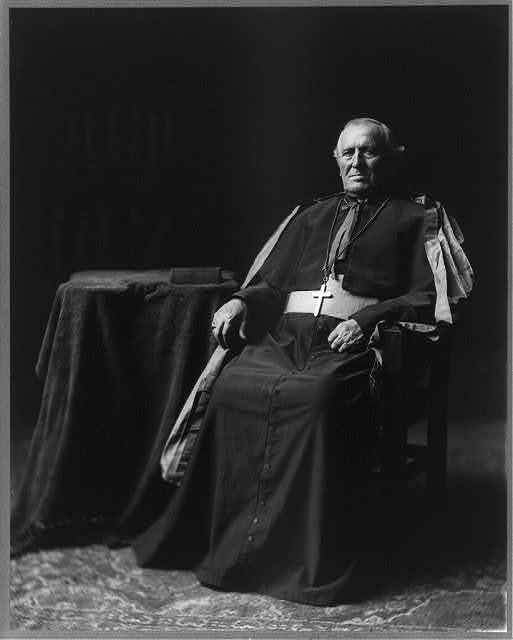 John Ireland was born in County Kilkenny, Ireland in 1835, and emigrated with his family in 1848. Although the family first settled in Vermont, after a few years the moved west, first to Chicago and finally to St. Paul, Minnesota.  After attending the French Marist Seminary at Montbel, where he was sponsored by Bishop Joseph Cretin of St. Paul, he was ordained a priest in 1861. He served as chaplain for a Minnesota regiment during the Civil War, and then as rector of St. Paul’s Cathedral. In 1875, he was appointed coadjutor bishop of St. Paul, and then consecrated as its third bishop in 1884. In May 1888, he was elevated to archbishop.

Ireland was an imposing figure in Midwest Catholicism and politics. He was a lifelong advocate for Irish immigrants, and in the 1870s worked out a plan to bring over 4,000 Irish Catholic families from Eastern cities to Minnesota farmland. Due in large part to his efforts, the number of Catholics in the area drastically increased during his tenure, and five new dioceses were cut out of St. Paul in 1889: Jamestown, Sioux Falls, St. Cloud, Duluth, and Winona. Ireland believed that the best way for immigrants to adjust to their new home was complete assimilation, including patriotic allegiance. He encouraged all immigrants to learn English and adopt American customs.

In addition to his work on behalf of the Irish, he also drastically increased the number of Catholic educational institutions in the area, including founding the College of Saint Thomas, and serving as one of the four bishops on the founding committee of the Catholic University of America. Ireland himself was known to be a scholar, writing reviews, essays, and delivering speeches, the most famous of which was “The Catholic Church and Civil Society,” delivered at the Third Plenary Council of Baltimore in 1884. One of his last major projects was the construction of a new cathedral for St. Paul, which took nine years to complete. Bishop Ireland died in St. Paul on September 25, 1918.