People at the Congress 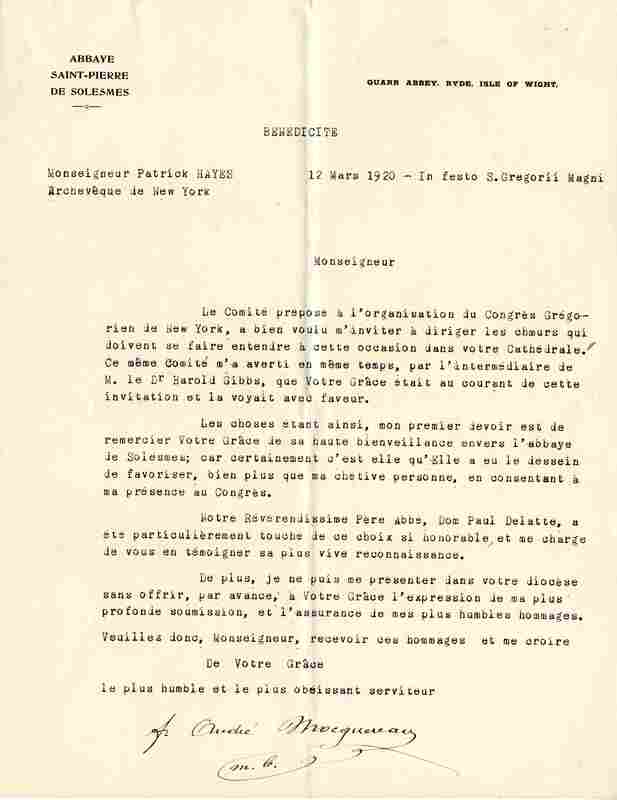 Dom André Mocquereau was born in La Tessoualle, France, on June 6, 1849.  In 1875, he entered the Benedictine Abbey of Solesmes in France, where he was ordained a priest in 1879.  He soon established himself as a distinguised music scholar, sepecializing in the study of Gregorian Chant under the direction of Dom Pothier. He was made choirmaster in 1889, and then prior of the Abbey in 1902.  During his tenure as prior, the order was expelled from France and reestablished on the Isle of Wight at Quarr Abbey. He died at Solesmes on January 18, 1930.

At the Congress at St. Patrick's Cathedral, Dom Mocquereau, considered to be the greatest living authority on Gregorian Chant, was the director of the Choir.  In the letter to the left, Dom Mocquereau wrote to then-Archbishop Patrick Hayes in March of 1920, thanking him for the honor of being selected to direct the choir. 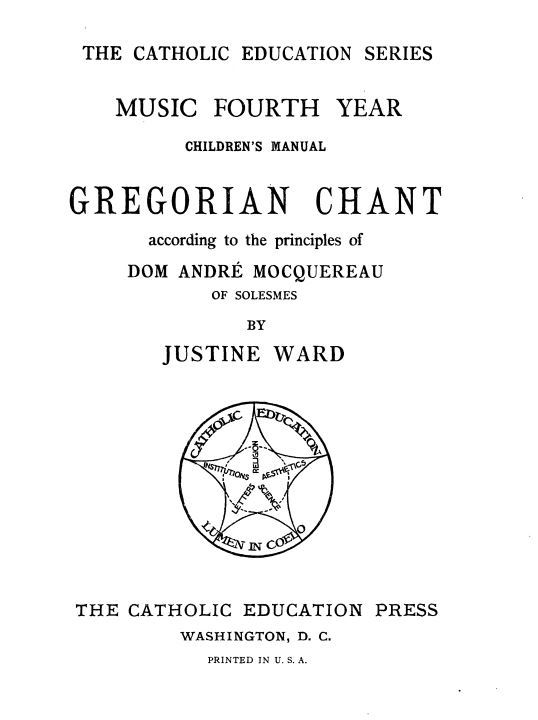 Justine Ward was born on August 7, 1879 in Morristown, New Jersey.  She converted to Catholicism in 1904, and saw one of her main purposes in her new faith to be the distribution of liturgical music, especially Gregorian Chant. Her conversion to Catholicism and connection with liturgical music seems to have come about through her friendship with the Jesuit priest, Rev. John B. Young, of St. Francis Xavier Church in Manhattan.  Young was himself a scholar of Gregorian Chant, and it was through her connection with him that Ward began to think of new ways to teach music, specifically Chant, to children.  Ward believed that liturgical music and prayer were deeply interwoven, and you could not understand one without the other.  Ward also truly believed that there was no child that could not learn music, rather it should be taught in school as a subject like math or spelling.  She wrote books promoting her method of teaching music, the Ward method, which spread throughout the country.

She was one of the organizers behind the 1920 Congress, and she was the one who approached then-Archbishop Patrick Hayes with the Congress’s plans for his approval.  After the Congress, in 1921, Ward traveled to Europe to study Chant under Dom Mocquereau.  In 1928, she established the Dom Mocquereau Foundation in the United States, which was a charitable organization to promote the teaching of Gregorian Chant, and she also funded a music school at Catholic University.  She died on November 27, 1975. 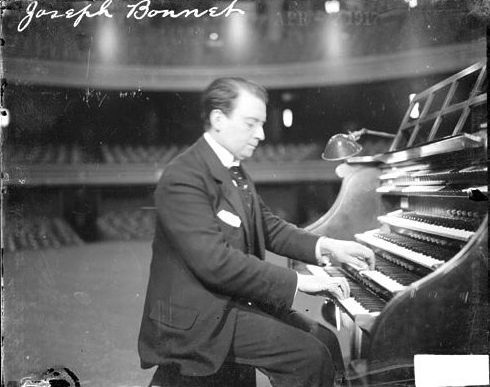 Joseph Bonnet at a 1917 concert

Joseph Bonnet was born on March 17, 1884, in the Bordeaux region of France.  He studied music from an early age, at first learning from his father, who was also an organist.  By 14, he was serving as the official organist at two different Catholic churches.  In 1906, he was appointed the organist at the Church of St. Eustache, in Paris, and by 1911 was teaching music as well as serving as the concert organist at the Conservatoire de Paris, a French college of music and dance founded in 1795.  He lived for a few years in the 1910s in the United States, traveling the country giving concerts.

By the time of the Congress in 1920, Bonnet was back in Paris at St. Eustache.  He was invited to be the official organist for the Congress.  The outbreak of the Second World War lead Bonnet to return to North America, where he spent time in both the United States and Canada.  He died in Quebec on August 2, 1944.