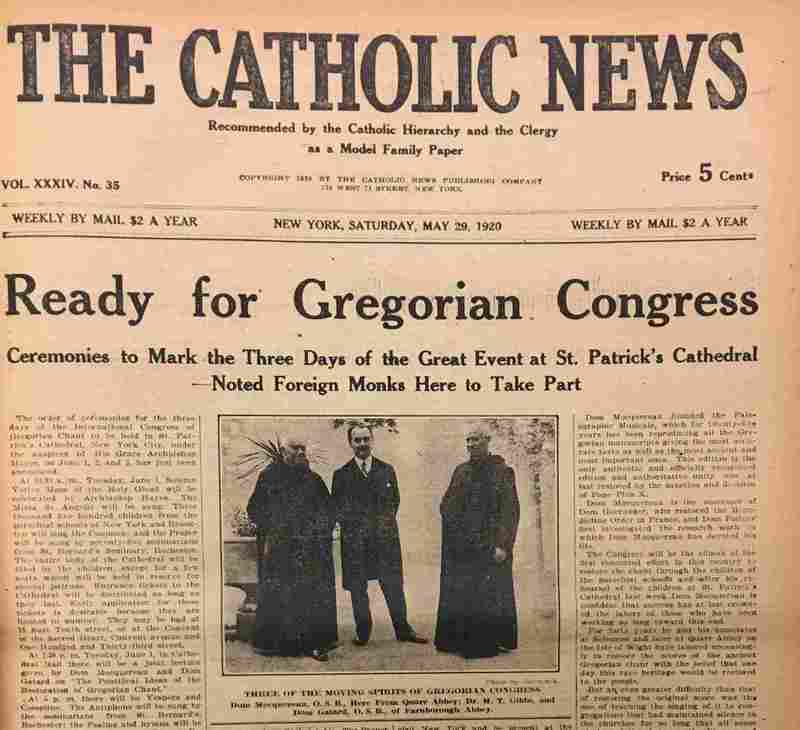 The Congress was first proposed in November of 1919, and by December of the same year a plan was drawn up by the Auxiliary Committee of the Pontifical Institute of Sacred Music and approved by New York’s then-Archbishop Patrick Hayes.  Mrs. Justine Ward, best known for developing a method of teaching music to children beginning in elementary school, served as the main liaison between the conference organizers and the Archbishop.  When the final program for the Congress was decided on January 3, 1920, every member of the Church Hierarchy was invited to become a patron.  Over 30 accepted, including His Excellency John Bonzano, Apostolic Delegate, His Eminence Cardinal James Gibbons of Baltimore, and His Eminence Cardinal William O’Connell of Boston.

In March of 1920, a letter of invitation was written to the Superior of every seminary in the United States, requesting the presence of their seminarians, or at the least their Schola Cantorum. A similar letter was also sent to Superiors of religious orders and parish priests in New York City and the cities of the Dioceses of Trenton and Newark, asking choirs to participate.  Invitations were also sent to 63 schools throughout the metropolitan area and Philadelphia, specifically to teachers that studied with the Pius X Chair of Liturgical Music, requesting that they send delegations of children.  Prior to the conference, free chant classes were held at different locations throughout New York, and several large rehearsals were held at the cathedral on the Saturday evenings prior to the Congress.  A general rehearsal for all adults and children taking part in the Congress was held on May 30.