Generally, the music courses remained consistent until 1966, when they changed from Church Music to Sacred Music, a result of the reforms to the Mass from the Second Vatican Council. Two new courses appeared in 1966, “Introduction to Sacred Music” and “Pastoral Aspects of Sacred Music.”  “Fundamentals in Music,” “Church Music Appreciation,” and a “Church Music Practicum” began to appear during the 1969–1970        academic year. These courses continued to focus on music in worship. The 1970s saw another change, in which “Music Literature,” “Chants and Hymns,” and “Church Music Practicum” were the courses taught. These courses focused on musical composition, music history, and the application of music in the parish life. The   music program would continue to follow a similar structure for many years. During the Rev. Anthony Sorgie’s tenure as Director of the Music Program (1985–2000), art appreciation was added to the Appreciating Sacred Music course. Today, two music courses are offered: “Elements of Chant” and “Liturgical Music Planning.”

The mission of the Seminary music program has remained the same over time, to offer fitting worship to God through the cultivation of excellence in sacred music in the context of sacred liturgy. However, the program has continued to grow as more opportunities arose for the Seminary choir as they began to perform various       concerts both at the Seminary and beyond. The choir would sing for Mass at the Seminary, St. Patrick’s Cathedral, and other parishes in the Archdiocese. In 1985, the annual Advent Concert Series began, inviting the public to celebrate the music of the church with the creation of the Festival Choir, a group of seminarians and outside singers. Since the 1960s, the choir has performed in concerts outside of the church, and in 1990 traveled to Italy to perform for the Pope.  This year, the Schola Cantorum will travel to France for a concert tour, a culmination of their hard work over the past few years. To learn more about today's Schola or to listen to their music, please visit their website. 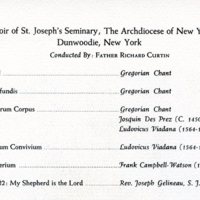 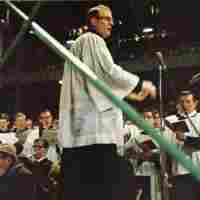 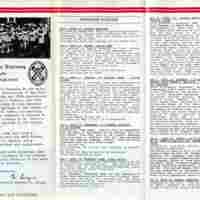