Prior to the opening of the exhibit, we had the chance to sit down with the Fr. Eugene Carrella to talk about his holy card collection. Fr. Carrella is the pastor at St. Rita's Church, Staten Island. Below are the questions that were asked and a summary of the answers provided.

What about Holy Cards interest you to start a collection? When did you begin to collect them? Where do you find the cards?

Fr. Carrella began collecting holy cards when he was 9 years old. He recalls that the first series he collected was from a local religious store on Staten Island run by the Society of St. Paul. These cards were sold for a penny each! Before the dawn of the internet, Fr. Carrella either purchased his cards from religious stores or received them from his parents after they had attended a wake. He remembers one collection in particular, cards with a blue background, which he competed with a friend to see who could finish collecting the series first. It was not until he began to use the internet that Fr. Carrella discovered the various styles of holy cards. The internet opened “a huge floodgate" of cards such as scalloped edges, lace edges, lithographs, and chromolithographs. His most valuable cards he found on the internet. For the most part, the cards purchased on the internet have been authentic. However, Fr. Carrella recalled one such instance where a company in Europe was reprinting holy cards to look like ones from the 19th and 20th century. He was able to tell the difference between the originals and the new ones based on the way the paper felt!

There are three characteristics of Fr. Carrella's collection that makes it different from the rest. First he focuses on saints, as they are the main reason why he collects holy cards. He especially looks for the attributes or symbols that are depicted with the saints that help to tell their story.  Second, he looks for unpopular saints, the more obscure, the better. Finally, he focuses on the beauty of the card. He will almost always choose a more ornate, colorful card over a black and white one.

Is it possible to have a favorite card?

Fr. Carrella struggled to pick a card as his favorite; there are so many to choose from! However, after some thought he decided that his favorite style of cards is from the German company Beuron and the Austrian company VLA who have produced Art Deco style pictures.

In addition to the Holy Card collection, Fr. Carrella also has an extensive statue collection and Holy Cards with relics.

Fr. Carrella actually began his statue collection before his holy card collection! His first statue was the Infant of Prague which he won from a Church Bazaar. He ultimately gave his first collection of statues away, about thirty of them. They were made of plaster and he gave them away to a local nursing home. Today, his favorite statues come from Spain and are made from wood paste.

Fr. Carrella also has many holy cards that have relics with them. He has one such card of Polish saint which has a piece of his bone with it! Fr. Carrella had a great anecdote to these cards as he recalled a time when a lawyer called him up who was dealing with a baseball card collection. There was some disagreement about whether or not baseball memorabilia creators were the first to attach a swatch of a player's uniform with a baseball card. However, Fr. Carrella informed him that holy card makers have been doing this since the early 1900s, long before sports memorabilia has!

Any particular memories associated with the Holy Cards?

For the most part no. Fr. Carrella collects Holy Cards as a collector, not for any specific memories attached to various saints or cards. However, he did recall a specific collection he received from someone who had seen him on TV on Treasures in Your Attic. This individual sent Fr. Carrella their mother's holy card collection which they just had sitting around their house. Fr. Carrella was moved by this gesture and incorporated these cards into his own.

Fr. Carrella offered the following advice for any potential collectors:

Fr. Carrella recognizes the importance of his holy card collection and has made it his "mission to retrieve and save [holy cards] as part of our Catholic history." 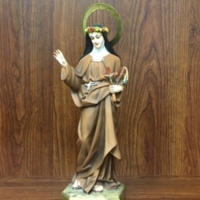 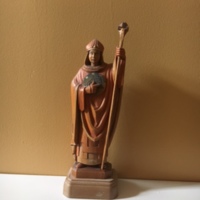 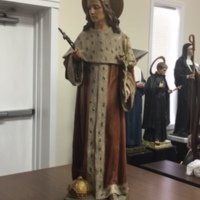 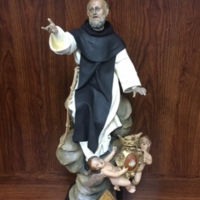 In addition to holy cards, Fr. Carrella also has an extensive statue collection. Here are a few examples of his statues. We also have these statues as holy cards throughout the exhibit.