The Fighting 69th in World War I 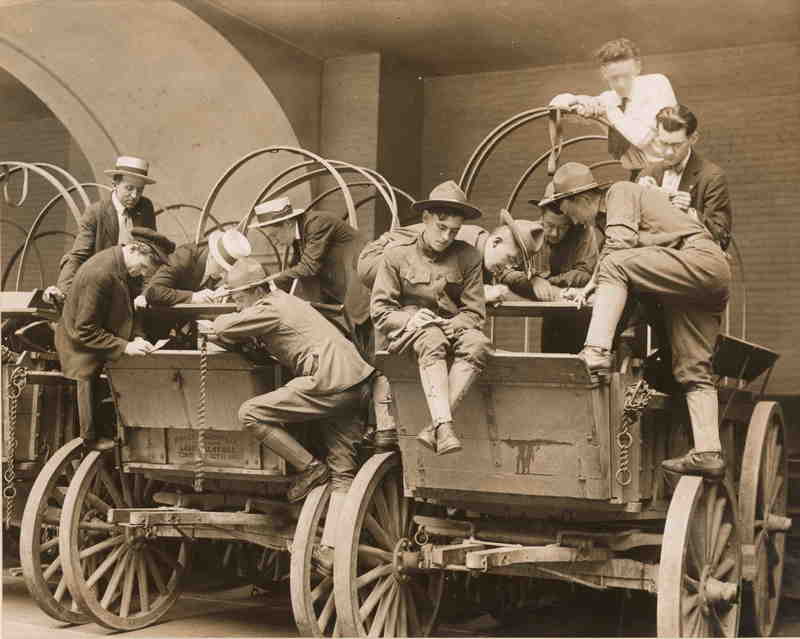 Men signing up for the NY 69th Infantry Regiment, Courtesy of National Archives

The 69th Regiment only had 500 men ready to fight when war was officially declared in April 1917. The United States Army, however, had just increased the size of a regiment from 2,000 to 3,600 men. Therefore, before any training could take place a campaign to increase enlistment began. Volunteers from all over New York came to sign up to fight with the famous Fighting 69th. Many of these men were Irish and were attracted to the once all-Irish regiment that dated back to the Civil War.  Many men from the 7th New York Regiment, including the poet Joyce Kilmer, were transferred to the 69th. Recruiting drives were held throughout the summer of 1917 and banners were hung throughout New York City while men stood on street corners pleading with their peers to enlist.

Father Francis P. Duffy, the Regiment’s chaplain, appealed to his parishioners to enlist with the 69th.  By August, the 69th was drafted into the regular army as part of the 42nd “Rainbow” Division. Though they were now the 165th Infantry, they were still known amongst themselves as the Fighting 69th. The 165th Infantry finally reached the required number of men toward the end of the summer. On August 20, thousands gathered to send the 165th Infantry on its way. Auxiliary Bishop Patrick J. Hayes along with Fr. Duffy and Fr. Joseph P. Dineen offered the regiment a blessing: “God bless you and good luck.”  The men made their way to the docks where they would be sent to Camp Albert L. Mills in Mineola, Long Island to prepare for war.

Over 30,000 men of the Rainbow Division gathered at Camp Mills to train before shipping off to France under the command of Colonel Charles Hine.  The men worked with rifles and bayonets and took part in vigorous physical training. The 42nd Division spent two months drilling at Camp Mills before being sent to France at the end of October. The Division battalions split up between Montreal, New York, and Hoboken, where they would embark on their voyage to France. 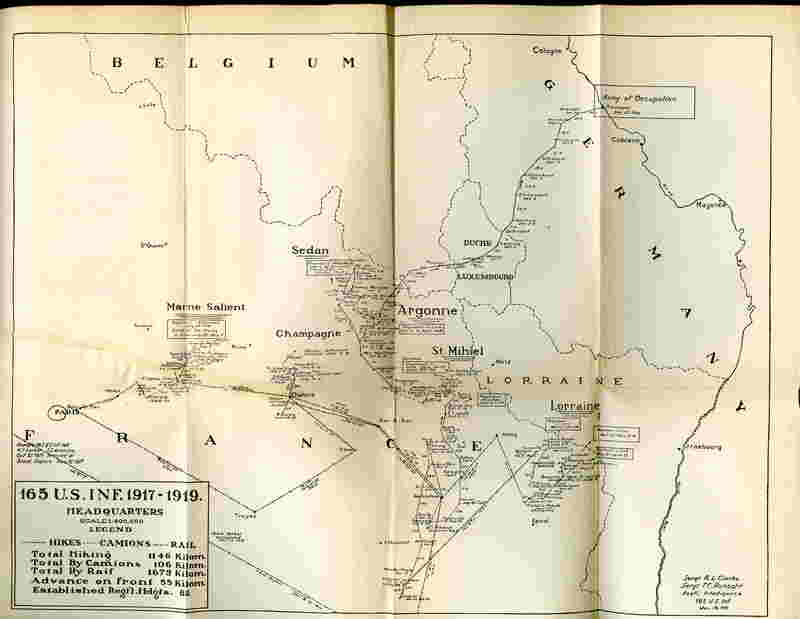 Map of the 165th Infantry Headquarters in France

In November, the men of the 69th arrived with their division in France, where the rest of the American Expeditionary Forces were stationed.  Training continued for them while they waited for orders.  While in Longeau, Colonel Hine, commander of the 42nd Division, was reassigned and replaced with Colonel John Barker. Finally in February, orders were received for the Rainbow Division to march toward the Luneville sector. There they would take part in their first battle.

The goal in Luneville was to hold the French line and prevent the Germans from advancing. While in the Luneville sector, the 165th Infantry experienced heavy artillery shelling, trench raids, and gas attacks.  The poet Joyce Kilmer wrote the poem, “Rogue Bouquet” based on his experiences in the Luneville sector. It was read out by Fr. Duffy on St. Patrick’s Day in March 1918.  In April, the men of the 42nd Division would move on to the Baccarat sector.  Here, the Division conducted raid after raid while holding the line for 82 consecutive days before being relieved. Also during this time, Colonel Frank McCoy relieved Colonel Barker as commander of the 165th Infantry.

In July, the 165th Infantry moved toward the Champagne sector where “the fighting was ferocious,” according to Fr. Duffy.  The 165th Infantry, along with the rest of the 42nd Division and the French army, defended against the German attack. This would be the last major German offensive of the war. With the Germans recuperating from their failed offensive, the 42nd Division and the French had the opportunity to counterattack at Chateau-Thierry along the Ourcq River. The 42nd Division would achieve one of the greatest Allied advances up to this point in the war, but at a high price as thousands of casualties resulted.

“The whine of bullets was incessant and the quick spurts of dust spoke of imminent death. But still the line kept crawling forward, each man keeping his resolution to the sticking point with no exhilaration of a head long charge nor even a friendly touch of a shoulder. In attacks such as this each man must crawl forward in isolation, keeping his interval from his neighbors lest destruction should reach too many at one time. It is the finest test of courage.” – Fr. Duffy on the Battle of Ourcq

“The ‘old 69th’ came out of the hell on the Ourcq a fully welded crack-fighting American organization.” – Corporal Martin Hogan

After a successful counteroffensive at the Ourcq River, the American Expeditionary Forces moved forward to St. Mihiel, travelling over 60 miles in 10 days. Upon arrival, the division began to bombard the Germans as they continued to advance. Rumors of the Germans seeking an armistice began to circulate throughout the men. However, there was still more fighting to occur before there could be peace.

The final major offensive for the men of the 165th Infantry took place in the Meuse-Argonne Sector, a crucial area on the Western Front with the German’s main railroad lines. At this point in the war, only 600 of the original 3,600 men of the 69th, who left New York in 1917, remained.  The men were met with continuous artillery fire as they navigated their way through the Argonne forest.   Two men, Sergeant Michael Donaldson and Colonel William Donovan, from the 165th would receive the Congressional Medal of Honor for their heroic effort during the Argonne Offensive. A few weeks later the armistice would be officially declared.

“The New York Irish 69th had come through their three long weeks of fighting and hardship with their tails still erect.” – Father Duffy 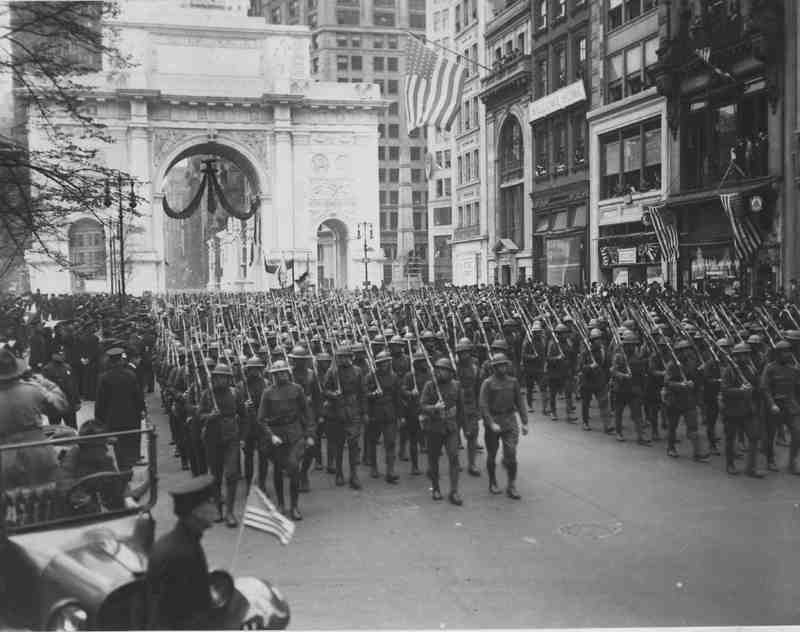 News of the Armistice reached the Fighting 69th on November 13. The men were happy that the war had finally come to an end, but could not forget so many of their fallen comrades who would not return home with them.  The 165th stayed in Europe as part of the Army of Occupation and finally marched on to Germany on November 16, 1918.  The men stayed in Germany for the winter of 1918–1918 and spent their days drilling and keeping in shape. Classes in reading and writing were also offered to the men of the division who were illiterate in order to prepare them for life after war. Finally, the 165th Infantry embarked on their journey home to New York in April, arriving at New York Harbor on the 21st

When the men of the 165th arrived in New York, only 1,400 of the original 3,507 men who left for France in 1917, were returning, including only 27 of the original 108 officers. This number was due to casualties and transfers of command. Thousands of people lined the docks to greet the men of the Old 69th as they finally arrived home. A few days later, a parade was held in their honor along Fifth Avenue. The men were greeted with flowers and cheers as they marched through Washington Square Park to St. Patrick’s Cathedral. Archbishop Patrick Hayes reviewed the Regiment from the grandstand outside of the Cathedral. The parade continued up towards 115th Street. The festivities concluded with a dinner for the entire Regiment at the Hotel Commodore. The Rainbow Division established a Veterans’ Association, and the 165th Infantry was assigned to be the New York Chapter. This group would help the men in the days to come as they acclimated themselves to life at home.