Women and the War Effort

The 1917 graduates from the Misericordia Hospital School of Nursing.  Courtesy Our Lady of Mercy Medical Center.

Religious women throughout the Archdiocese did their part for the war effort in different ways.   The Dominican Sisters of Newburgh, New York, were encouraged by their superior to do their part for the war effort.  After reading a newspaper article about how some lay Catholics were saying one million Hail Marys for “war victims,” the Mother Superior instructed all of the sisters and the students under their care to recite one Rosary every day for the month of November, which she estimated would be a total of seven million Hail Marys.  Every convent that housed Sisters was also ordered to purchase a $50 Liberty Bond.  The Dominican Sisters of Sparkill, New York, served the cause in similar ways.  The sisters were encouraged to use their free time in sewing linens to be used in Chaplains’ Kits.  In the schools, the sisters oversaw the formation of branches of the Red Cross, and led their students in knitting and rolling bandages.  The Sisters of Misericorde, who staffed Misericordia Hospital, saw the hospital safely through the war.  Throughout 1918, the hospital was subject to city-wide blackouts.  No lights were to show through the windows.  The Red Cross Department of Nursing also required all Sisters who had gone through the nursing school to be registered for military service. 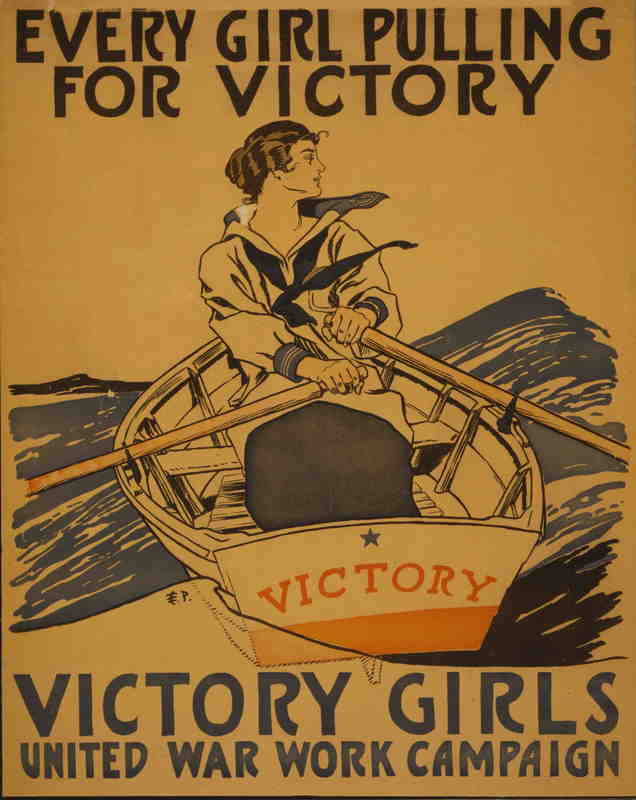 Courtesy of the Library of Congress.

The United War Work Campaign kicked off in the fall of 1918. The National Catholic War Council was one of the seven institutions involved in the campaign to raise money for the men as they transitioned into armies of occupation and then eventually home. The Victory Girls resulted from this campaign as part of the Earn and Give Division. The idea was to recruit the local girls, between the ages of 12 and 20, to earn money and then donate it to the United War Work Campaign. Each child was expected to give a minimum of $5. Some of the jobs suggested for the girls were babysitting, running errands, and tutoring. The girls of the various churches were eager to join, so that they could do their part. They held rallies and parades at their schools to generate excitement for the campaign 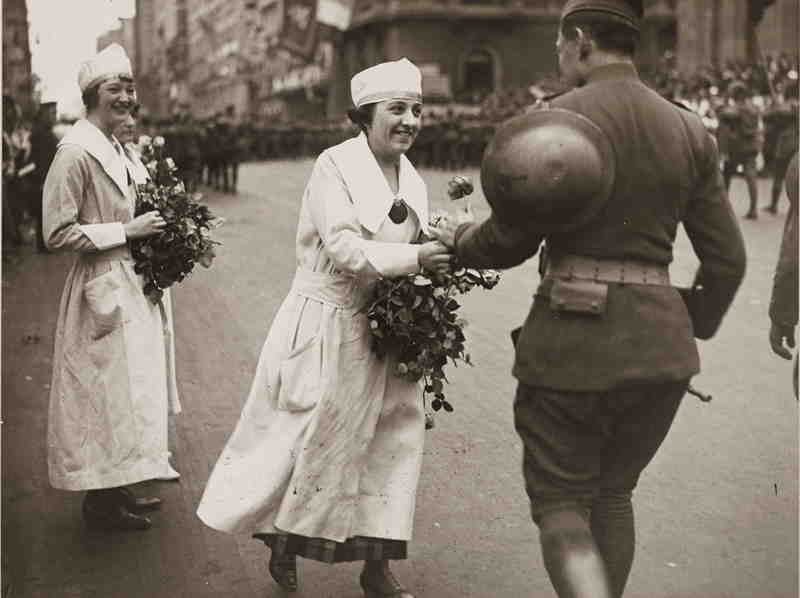 Members of the League of Catholic Women distributing flowers to the men of the 77th Division. Courtesy of the National Archives

The League of Catholic Women opened a headquarters at 154 E. 38th Street to serve as a space for their members to carry out their war work. The headquarters was outfitted with sewing work rooms, surgical dressing classrooms, executive offices, and a kitchen for canteen courses. On November 25, 1917, the League of Catholic Women opened their Catholic Service Club for Sailors and Soldiers at their headquarters. It was the first club of its kind, and men were entertained, fed, and made to feel like they were at home in the club. Over 100,000 men would step through the doors between 1917 and 1919.

The Young Women’s Catholic Patriotic Club was opened by the New York Catholic War Council on Lexington Avenue on June 8, 1918.  Admission to the Club was open to young women aged 16 and older, and offered classes in swimming, stenography, French, Spanish, Business English, gymnasium, millinery, dressmaking, cooking, and singing.  The Club was mostly meant for working girls, and during the war offered classes on the conservation of food, lectures, and opportunities for “patriotic service.”  One entire floor of the club was for knitting machines to make bandages and surgical dressings.  On Saturday nights, the Club held dances for servicemen.