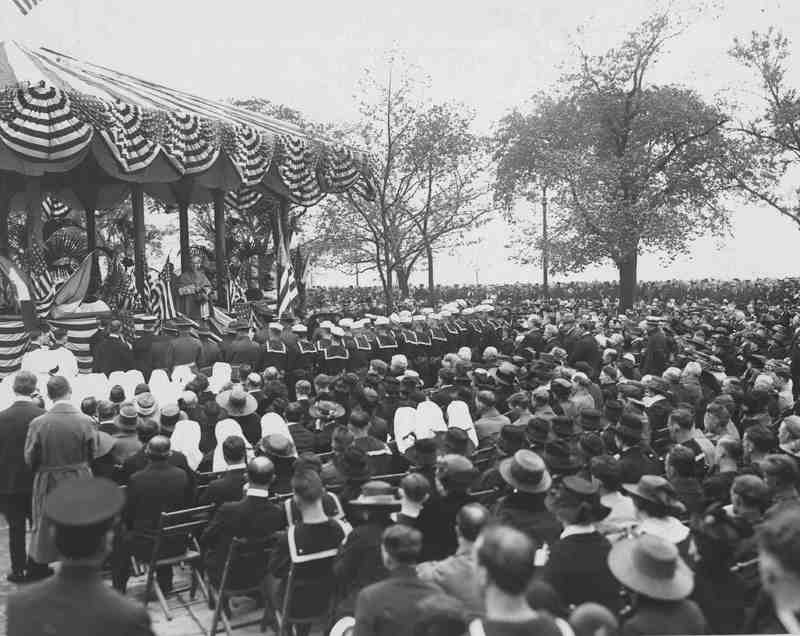 Bishop Patrick Hayes delivering a sermon at a Military Mass in Battery Park for the Americans killed in France, May 31, 1919 (Memorial Day).  A crowd of over 10,000 attended the service.  Courtesy the National Archives.

The Episcopus Castrensis (The Military Diocese)

America’s entry into the First World War saw a rapid growth in the number of Catholic chaplains serving the military, an increase from 25 priests in April 1917 to 1,023 on Armistice Day (November 11, 1918).  This quick expansion led to much confusion among the clergy and the religious hierarchy.  Many priests were serving in dioceses other than their own for the first time, and were not sure where to turn for advice and counsel—their home bishop or the bishop of the diocese where they were serving.  Pope Benedict XV recognized the difficulty chaplains were facing, and so on November 24, 1917, appointed Auxiliary Bishop Patrick Hayes of New York as the new Catholic Bishop Ordinary of the Armed Forces of the United States.  Chaplains now had a designated place to turn for guidance and instruction.

The new Military Diocese immediately started organizing itself to best serve the ever-increasing number of chaplains.  Bishop Hayes divided the diocese into five vicariates: Atlantic Seaboard (New York), Great Lakes (Chicago), Gulf (New Orleans), Pacific (San Francisco), and Overseas.  The territory covered anywhere there were Catholic chaplains, fighting men, physicians, or nurses.  The Bishop and his Chancellor were based in New York, with an Executive Secretary in Washington, DC.  The Rectory of the Military Ordinariate was based at St. Stephen’s Church, where Bishop Hayes served as Irremovable Rector.  The Overseas Vicariate closed in 1919, but the other four vicariates continued to operate long after the war. 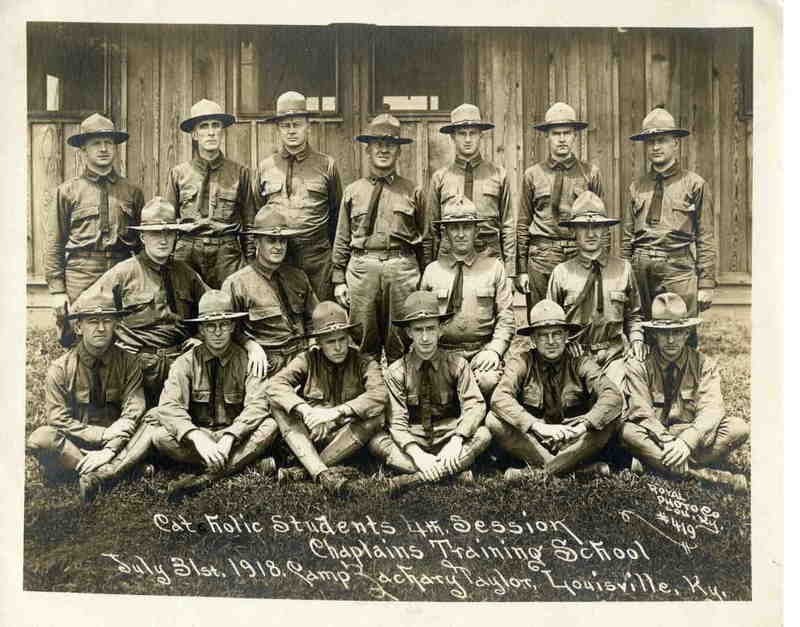 The Role of the Military Diocese

The main purpose of the military diocese was to oversee the work of the chaplains.  Much of the day-to-day administrative work was done by the Chancellor, Msgr. Waring, who in 1912 wrote a pamphlet titled Duties of a Chaplain. According to this, a chaplain’s main responsibilities were to:

-          Focus on being a clergyman, and leave the military end to those who have made it their lives’ work—government doesn’t want chaplains to take the place of military officers

-          Focus on instilling religion into everyone he comes into contact with

Hayes, in writing to all chaplains upon his appointment as Military Vicar, wrote “A war chaplain must be a man of marked spiritual life both for the efficiency of his ministry and for the safety of his own soul.  If the course of modern warfare demands military leaders to be almost superhuman from the viewpoint of genius, endurance, and courage, surely priests who serve among such men as ministers of Christ and guides of souls should be of a very superior type with regard to strength and spirituality of character.  The Chaplain Corps should be so impressively and supernaturally clean-cut in its alignment before the public eye that no place be given in its body, for a moment, to a weakling, moral or spiritual….The fair repute of the Church and the good of religion are in the keeping of the chaplains as a very precious and sacred trust.”

In order to become a chaplain, a priest had to submit an application as well as a recommendation from their bishop, which then had to be approved by the governing board on Governors Island, under the supervision of Msgr. Waring.  The priests also had to pass a physical examination.  Their recommendations would then be sent to the War Department for official confirmation.  A number of chaplain applications were rushed through in the months after the United States entered the war, in light of the large number of soldiers that would soon be headed to camps throughout the United States.

Chaplains were required to attend training school for the first time in 1918.  Most chaplains had been civilians before their commission, and were unfamiliar with many aspects of military life.  Many also were unprepared for the spiritual demands of wartime.  The first chaplain training school was approved on February 9, 1918, and opened at Camp Taylor, Kentucky.  An additional school was also set up in France, for those chaplains who had arrived overseas without a chance to go through training.  It was a condensed version of what was offered at Camp Taylor.