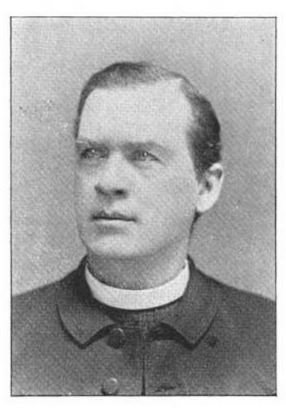 Fr. Michael Callaghan was born in County Cavan, and emigrated to New York as a young boy.  He attended St. Francis Xavier High School and then entered St. Joseph’s Seminary, Troy, where he was ordained on May 22, 1869. He was first assigned to St. John the Evangelist in Manhattan, and then as pastor at Assumption in Peekskill. Fr. Callaghan had been a friend of Fr. John Riordan, and was said to have a similar working style.

When he was appointed to the Mission, it was deep in debt and the building itself was very run down. The parish congregation was mostly the working poor, heavily Irish and German. He initiated an annual picnic at Sulzer’s Park in Harlem as a fundraiser, with dancing and other entertainments. Tickets to the annual picnic were fifty cents each, and there were a variety of prizes up for grabs over the years, including diamond rings and gold watches. He later instituted an annual ball at a local hotel, and although these both brought it funds it was still not enough.

The Mission was responsible for the building upkeep, clerical living expenses, and provided for the girls who stayed for a short as an overnight or as long as a week. Additionally, they often advanced girls money to help them get to their final destination. All of these expenses were on top of the parish’s existing debt, which was over $70,000.

In order to raise enough more money, Fr. Callaghan organized Metropolitan Fair in May 1890 at the Old Armory. He set up an organizing committee of 100 members, and obtained a letter of approval from Archbishop Corrigan. Cardinal Gibbons opened the Fair, and it ran for three weeks. The Fair was well attended, and one of the highlights was when Mrs. Grover Cleveland presided over the flower booth at the Fair for a night, selling roses at $25 each. The Archbishop of Cashel donated a silk Irish flag to be raffled, and was won by the Ancient Order of Hibernians. Charlotte Grace O'Brien sent a letter and a donation. The Fair ultimately raised over $40,000 for the Mission.

Fr. Callaghan was the only priest to serve all three of New York’s immigration stations: Castle Garden, the Barge Office, and Ellis Island. He died on February 10, 1896, having successfully paid off the entire debt of the Mission.